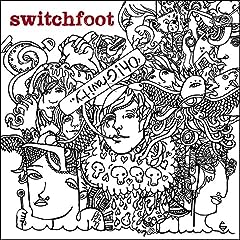 This January I was lucky enough to acquire a copy of Switchfoot’s new album, Oh! Gravity. I’ve given it a few spins, and it’s not bad. With that being said, I find myself missing their old stuff. New Way to Be Human, Learning to Breathe, even The Beautiful Letdown all have a markedly different sound and feel to them in comparison to Nothing is Sound or Oh! Gravity.

You won’t find the guitar distortion typical of Switchfoot’s current sound in these previous albums, but you will find beautifully crafted rock with inventive, quirky instrumentation and catchy hooks. I recently grabbed New Way to Be Human off of Amazon.com, rediscovering an album that is solid from cover to cover. It’s interesting to see a band meld music that’s fun to listen to with lyrics that make your head spin. “Amy’s Song,” “Only Hope,” Let That Be Enough,” even “Something More (Augustine’s Confession)” — there’s a depth to the words Jon Foreman pens that leaves you breathless. Off of Learning to Breathe, check out these lyrics from “Economy of Mercy”:

These carbon shells / These fragile dusty frames / House canvases of souls / We are bruised and broken masterpieces / But we did not paint ourselves / And where will I find You?

That’s one of my favorite lyrics out of any song I’ve heard, and I bought this album back in high school; it’s poignant and paints a vivid picture of the human condition. Words like that don’t just fall out of the sky. The Beautiful Letdown also doesn’t disappoint with its content, though there are a few songs I feel were hit-and-miss. That album was Switchfoot’s first taste at mainstream success, and the world hadn’t heard anything quite like them before.

Personally, I think Switchfoot deserves all of the acclaim it’s received thus far – there are few songwriters today that can craft songs the way that Jon Foreman can, especially in the arena of rock and roll. I do feel, however, that Switchfoot has lost sight of their roots, lost sight of part of what made them such a wonderful band – the accessible …. you see it in “Dare You to Move,” you see it in “24,” you see it in “Beautiful Letdown,” and you see it in their live shows. But, to a degree, on the last few albums their poignant art has found itself somewhat obscured by the overpowering nature of the rock and roll sound they seem to be developing. The words are still there; they’re just harder to see through the noise.

I still have high hopes for Switchfoot and their messages of hope and redemption in a world found lacking. I’m sure Oh! Gravity. will grow on me, but if you’ve never heard Switchfoot’s older fare, you’ll be doing yourself a huge service by grabbing a copy of Switchfoot’s retrospective The Early Years: 1997-2000 over at Amazon.com. You won’t be disappointed.

2 replies on “Switchfoot: Looking Back”

Hunter,
My thoughts exactly. I discovered Switchfoot late in the game, about 6 months after Learning To Breathe came out and I was hooked. I could not get enough of their music in to my ears. The Beautiful Letdown was released and I fell in love all over again, but this time my wife tagged along as well. But, as you stated, the last two just do not have the sound that I have come to love from this band. I am the first to say that a band should evolve, but from what I have heard, the have gone backwards. Nothing is Sound spun about 5 times in my CD player and actually ended up somewhere in my garage for a year after cleaning out my car one day. Looks like Oh Gravity is headed in that same direction :(.

This album should have come with a 30-day money back guarantee stitched in the liner notes, although Faust, Midas, and Myself seems interesting for some reason…

Verse of the Day

Whoever loves pleasure will be a poor man; he who loves wine and oil will not be rich. (Proverbs 21:17, ESV)